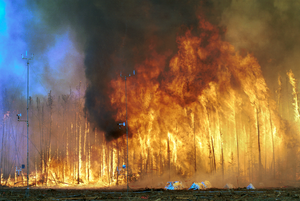 Wildfires spark their blazes in an instant and can spread rapidly, pushed and fueled by high winds, they can cover vast areas, very quickly consuming everything in their path.  Wildfires occur in many places across the globe such as the hot, dry outback in Australia or the more arid regions in the United States, which sees anywhere between 60,000 and 80,000 wildfires occurring each year burning roughly 3 to 10 million acres of land, depending on the year.  Wildfires can cause extensive damage to both man-made infrastructure and human life.  Their effect on wilderness areas can be beneficial to such ecosystems, clearing the way for new life in dense old growth and providing much needed nutrients, which replenish the soil and enhance the forest upon re-growth.  While some wildfires burn in isolated wilderness areas, others can occur or spread to homes and other properties that lie in the wildland-urban interface, a zone of transition between wild and developed areas.  Causes of these fires vary but include lightning strikes, volcanic eruption, sparks from rock fall, spontaneous combustion as well as human causes such as arson, cigarette disposal, etc…  Wildfire behavior and severity depends on the amount of available fuel and the weather at the time of the blaze.  These types of fires have a rapid forward rate of spread (FROS).  When burning through dense, abundant fuels, they can move as fast as 6.7 mph in forests and 14 mph in grassland areas.  Droughts brought on by regional and global climate patterns can increase the risk of wildfires in many areas, especially when coupled with high winds.  Cyclical weather patterns can also increase or decrease the risk of wildfires.  Areas affected by years of heavy precipitation and then followed by warm periods have a higher potential for more widespread fires and longer fire seasons.

Wildfire risk is dependent mainly on geographical location.  Weather patterns, human activities, and availability of combustible fuel all factor into the equation when determining wildfire risk.  A close proximity to wilderness areas prone to such events increases the risk of wildfire damage to one’s property or business.  More recently, human induced geographical and climate changes have increased the amount of exposure to wildfires and their damaging effects.  The gradual warming of our atmosphere has sent once temperate regions into periods of drought, thus increasing wildfire risk in such areas.  The rapid expansion of human developments in the past half 50 years into and nearby fire prone areas has greatly increased instances of wildfire devastation to property and communities as well.  In the US, most of the burden of wildfire risk is heavily distributed to the southwest regions such as California or Colorado.  Again, the risk in these areas has increased with the ever-growing expansion of human development into the wildland-urban interface.

The 2012 wildfire season in Colorado took a heavy toll on residents burning over 600 homes and damaging business and social infrastructure with damage estimates totaling roughly $450 million from insurance claims.  This year in California, the governor declared the first week of May as “Wildfire Awareness Week” in an effort to prepare local communities in the face of an ever-increasing wildfire risk.  Most homeowner insurance policies provide coverage for physical damage to the property as a result of wildfire.  They also regularly provide living expenses if an evacuation is necessary.  As always the scope and overall coverage due to wildfires varies throughout different insurance companies.  Many cover damage to the structure by fire, but also provide coverage for smoke damage, soot and ash and the slurry that can form when they are mixed with water left over from fighting the flames.  This wildfire residue was not inside the home in the first place and by all means the damage should be covered by your policy.  As always, there are exclusions to such coverage.  It is also well known that some insurance companies use complex policy wording along with the exclusions to deny claims or full coverage of the damaged property.  If you’re home or business property is located in a wildfire prone area, it would be wise to examine one’s policy coverage concerning this type of risk.  In many cases, insurers offer settlement amounts based on a percentage of replacement costs.  The full value of the policy is not paid until structures are rebuilt and possessions are replaced.  Many homeowners who have diligently updated their insurance annually to reflect rising property values are taken aback when offered these types of settlements and feel pressured to accept them due to the difficulty of financing the full rebuild themselves.  Many homeowners and insurance advocates are calling for laws that would require insurers to pay the full face value of the policies up front in the event of a total loss, without depreciation or the holdbacks.  Many property owners in high-risk areas end up paying much higher premium rates as well, which only adds to the frustration when denied full coverage after their loss.  Your policy is key to your entitlement, the more you know regarding your coverage and exclusions, the more prepared you will be when facing the task of rebuilding your home or business after the disaster.  It is always a good idea to consult an unbiased insurance professional in order to be fully prepared in the event of a loss due to wildfire.