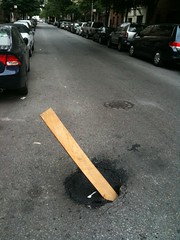 Sinkholes are depressions or holes in the Earth’s surface caused by the dissolution of a layer or layers of soluble bedrock, usually carbonate rock such as limestone.  Subterranean drainage wears away at these layers, carrying away sediment and eventually causing the area above to collapse.  These sink holes can be very dramatic, as we’ve seen in Florida recently, they can occur in populated areas resulting in structure collapse and human casualties.  Sinkholes are common in the state of Florida due to the geographical makeup of the land.  They can occur gradually over time or very quickly causing damage from as little as cracks in the sidewalk to swallowing up portions of homes and cars.  Florida law requires insurers to cover “catastrophic ground cover collapse” but that does not necessarily mean damage caused by a sink hole will be covered by your policy.  Florida law defines catastrophic ground collapse differently from sinkholes.  As per usual the policy wording is complex with catastrophic ground cover collapse defined as “geological activity that results in all of the following:

2)      A depression in the ground cover clearly visible to the naked eye.

3)      Structural damage to the building including the foundation.

4)      The insured structure being condemned and ordered to be vacated by the government agency authorized by law to issue such an order for that structure.”

Therefore if your home or commercial property sustains damage from a sinkhole but does not meet all four of the catastrophic ground cover collapse definitions (e.g. structural damage sustained but building is still livable/operable) your insurance may deny your claim if you do not have additional sinkhole coverage.  Florida (and Tennessee) insurers are required to offer additional sinkhole insurance as an addendum or rider to an existing policy and for an additional premium.  If you have additional sinkhole coverage and sustain damage from a sinkhole, your insurance company will likely order a geological report that will dictate the cause of damage.   By law you are entitled to an unbiased evaluation if you are in conflict with your insurer over whether or not damage was caused by a sinkhole.  Sinkhole insurance in Florida has been a difficult issue for policyholders and insurers alike.  Premiums for sinkhole coverage have increased significantly last year, with Citizens Property Insurance jumping their rates 50% in some sinkhole prone areas of Florida.  Private insurers have been reported hiking rates up to 200%.  The reason for rate hikes according to insurers is due to the sheer amount of sinkhole related claims received over the past 5 years.  Florida’s porous limestone underground contributes greatly to these types of natural disasters.  It is always a good idea to review your coverage and the risks associated with your building’s location (geographically speaking), with the hope of bettering your chances of compensation in the event of these types of disasters.