Once a major storm has passed, people often discuss which is worse, wind or water?  While wind damage typically comes quickly and violently the damage is usually a narrower path in scope.  Water damage from flooding usually covers a much wider chunk of real estate and the effects can be much longer lasting.  The reality is, other than fire, flooding is the most common business disaster.

Consider Hurricane Katrina, one of the biggest storm events in the past 50 years.  Most of the property owners that suffered damage in that region were insured for wind damage that occurred but not for the huge tidal surge that did most of the damage.  Subsequently, lawsuits and delays stemming from insurance issues slowed the rebuilding of that area for years. 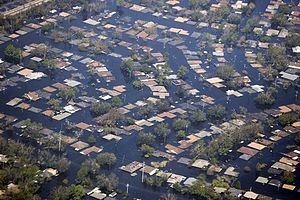 It is fairly common that most standard commercial insurance policies exclude flood coverage.  Specific flood coverage is available through the federal government and private insurers.  Therefore, it is imperative to understand the flood risks in your region and assess the level of flood insurance that might be appropriate for your business.  It is important to note that flooding does not always come from rivers, lakes and sea.  Heavy rains that come for days on end can result in saturated ground and over-stretched sewer systems resulting in floods in any location.

Certain countries, states, regions have national flood insurance plans as well.  Making a claim with these agencies can be time consuming and complex.  If each step isn’t performed exactly according to procedure, your claim may be rejected and one may be forced to reapply.  If you have both business flood insurance and a government supported policy, then the claims process can indeed by even more convoluted.

Other aspects of flood damage that often go overlooked are the long term effects of building foundation compromise, mold and bacteria growth over extended periods of time along with plumbing and wiring damage not visible upon standard evaluation.

Fast forward to the recent devastation of Superstorm Sandy and we see a specific example of an issue regarding flood damage and it’s coverage under existing polices.  In New Jersey, a battle of definitions is unfolding in many cases dealing with flooding from sewer backup in basement homes after the storm.  Hoboken, NJ sustained major flooding as the Hudson River spilled over its banks and flowed into the city during Sandy.   The National Flood Insurance Program has been seen denying coverage to flooded property owners based on the fact that the flooded area is being defined as a basement, thus severely limiting what is covered under their policies.  To many, these basements are their homes and critics of the Flood Insurance Programs’ classifications say it punishes owners in cities and “do(es) not reflect the reality” of urban living.   So again we see a clear example of the complexity of coverage regarding flood damage and the importance of policy language interpretation for property owners both pre and post loss.